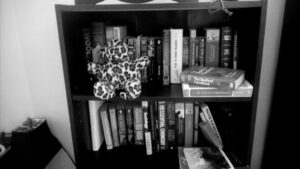 I’ve mentioned on the blog and newsletter of “cutting down”. I’ve mentioned it a lot, because I’ve enjoyed it and made money at it. We’re nearly an entire year into this change, and I found the term that describes it. Minimalism.

Trust me, I never thought it was minimalism. When I think of minimalists, I think tiny houses, all belongings that fit in one bag, and very sparse rooms. And yes, the extremes do look like those things, but for most people, it looks very different.

When I started selling things on eBay, it was because I needed money. Choosing what to sell was easy. Some old games I never touched anymore held their value, so I sold them for what I paid for them. A great deal. As I did that more and more, I realized there were a lot of things I no longer touch that held their value.

So with a job that was giving me less, I was able to essentially clean my room and make up the difference.

Since then I slimmed down more. Movies, books, fitness bands, all kinds of things have left the house. I kept track of all the states my things have gone, and as of right now, my things are in forty of the fifty states.

Recently I’ve given up on laptops and working exclusively on tablets. An iPad for work, an entry-level Android tablet for home. Minimalism in my life was becoming a thing, and I hadn’t even realized it.

I’m going to post a new series on the blog about the journey to a more minimalist life. As a speculative fiction author, I have my work life down to the essentials. I’ll share the photos and memories of the things I’m giving away and selling. I’ll also post the things that I’m adding that are really adding value to my life.